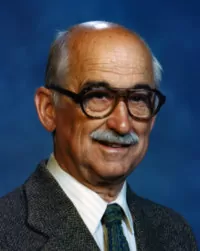 Many Old Sedberghians and staff members have written very moving comments about Vincent since word went out that he had died.. All of us who knew him recognize that he was a very special human being and that we are all the better people for the time he spent with us.

Those who knew him best, Tom Wood and Ann, Boyd Whittall, Tom Burpee, and Peter Kirby have reminded me of so many of the stories of Vincent's life and his relationship with Sedbergh and I include in this essay some of those stories. I too have looked back and will share with you moments that I have not forgotten.

Was it in 1950? I think I got my first "morning run" in that year. As a Sedbergh student, I got quite a few of them, (didn't we all!) but I remember this one in particular. "Take this note and place it in Mr. Lavoie's mailbox. And don't forget, be back so that you are in time to do the "block" before breakfast", the teacher said. I groaned!

At "break" that morning, sitting in my locker down in the basement, chewing on sodden toast from breakfast, I asked someone, "Who is Mr. Lavoie?".

"Oh, he lives in the red house down at the end of the Back Valley; it's where we start our Home Runs on Mondays." I knew the house, but not the man. Not yet.

Next morning, at 6am, I walked into the Back Valley and down to the red house on the right side of the road, and as I opened the mailbox to put in my card, I heard a voice behind me. "Have a good run." I turned, and there he was, the man I would know and admire for the next 72 years of his life.

"Thank you",...and I paused, before blurting out "sir." Somehow, "sir" seemed the very necessary word for this man - and for the next 72 years, whenever and wherever we met, I called him that.

Vincent was a legend. He died August 1 at age 103. Many of us had him as our French teacher at Sedbergh. His family ran the post office in Montebello. He was a soldier, he was a scout master, he was a businessman, he was involved in many of the activities in the village. He married Nora, who he had met in Scotland during the War; she was a driver for officers. He and Nora always welcomed us whenever we came back to school to visit..

Vincent arrived in the Valley in 1939, having bicycled up from Montebello because he had heard that "some crazy English people were building a school there". That day, he met Tom Wood and the relationship between the two boys was launched and has never ended. Boyd Whittall reminds me that Vincent found a bunch of shirtless, English speakers, with picks and shovels, scrabbling at the hard rocky surface at the top of a hill above the Valley. A big rock, later known to us as "the big rock" and never visited on the pristine "Sacred Lawn", stood massive and immovable. I guess we all remember it!

Having confirmed the rumour that a school was being built there, Vincent asked if he could visit again. He could hardly believe his eyes. They must be crazy! A school? Here in the wilderness? One of the workers was Frank Duxbury, our co-Founder. He and Vincent established a relationship which lasted all the time that Frank remained at Sedbergh.

Vincent and Nora started a family in the Valley; they lived for years in the little house by the side of the road which later students knew as "the Gruery", when Pat Pettigrew and Sara lived there. John Macaulay lived across the Valley beyond Senior Field in Vincent's time. The story goes that both men used to sit on their stoops and talk to each other across the 700 hundred yard distance every morning before school started, planning out the day - and they could hear each other as though they were sitting beside each other! Vincent and Jackrabbit Johannsen became old and close friends. Vincent taught at Sedbergh for two periods in the school's history, leaving the Valley only once when he became involved as a businessman in the wood and lumber trade. But the Valley and the School drew him back. How many of us will remember "Boys, you have to learn how to learn!" and on the cross country trails his "Boys you will have to learn how to pace yourselves!"

Tom Burpee, a Sedbergh student of the 1940s remembers Vincent when he was his French teacher explaining a French rule that Tom has never forgotten. "He taught me the list of adjectives that go before a noun in French." Apparently, this is unknown to most French speakers. Tom has asked friends both in Canada and in France and they all shake their heads. "The list begins," he says, "ancien, beau, bon,cher, digne grand, gros, jeune, joli, etc. I am so proud to remember that because I was only 11 years old. Thanks, Vincent.!"

Strange the memories we keep close to our hearts!

Tom and Ann Wood have a long and very affectionate attachment with both Vincent and Nora and with their family. In 1970, when Vincent came back to Sedbergh, Tom remarks that his value was inestimable. "He was an effective teacher, an encouraging coach, a raconteur par excellence, warm, and yet strict when it was necessary. His discreet and perceptive character made him a great diplomat and he was a useful buffer during difficult days between the staff, the school, and the Provincial government, and even between the Old Man, and myself. He became the Old Boys' officer and was busy with Jackrabbit and the Canadian Ski Marathon. The boys loved him and we admired him so much. Vincent was voted in as an Honorary Old Sedberghian."

Vincent's family was intimately involved with the school for years and years. Ann Wood speaks so highly of Darquise Lavoie, Vincent''s sister-in-law, who acted as Sedbergh's competent, loyal, dependable secretary, bookkeeper, accountant, and letter writer for thirty years. "Sedbergh could not have existed without her", Ann reminds me.

If there be one person wno knew Vincent better than anyone, it must be Peter Kirby, another Sedbergh graduate from the 1940s. He kept up with Vincent throughout his long life. They lunched together with Pat Pettigrew and me many times. He tells tales of Vincent's extensive war service in Italy and later at the liberation of Holland. He reminds us of Vincent as a teacher with a teacher's salary insufficient to support his growing family and having to look for a new job beyond the Sedbergh Valley. Vincent became a partner in a ski importing company and later worked with Peter, Bill Pollock, and another Sedbergh teacher and arborist, Archie Jones, in a fledgling company, Northsport. His ability in finances helped them enormously. Vincent became an owner of a Wood Mizer, the new brand of portable band saw mills so popular in the forest industry. Vincent's interest in forestry and in good logging methods lasted all his life and he had on his own property a wonderful standing of excellent hardwood.

Finally, my own relationship with Vincent continued when Sedbergh closed in 2010. We saw each other periodically. His sight was failing and we would drive together into Montreal to see his spacialist. I would listen to his stories; he was a father figure to me. I visited often when he and Nora moved to the Veterans' Hospital in Ste Anne de Bellevue. After Nora died, Vincent continued to do the gardening at the hospital, and he was the only resident that the staff would allow to go out to lunch. Tom Burpee and Boyd Whittall would take him. I would visit him and chat. Always the gentleman, always "dressed to the nines". I miss him. We all do, don't we?

And we all wish Tom and Guy and Ian and Jaqueline and Vincent's extended family our deepest condolences and offer our great thanks that we, as Sedberghians and friends, were able to share with their father such important times in our lives.